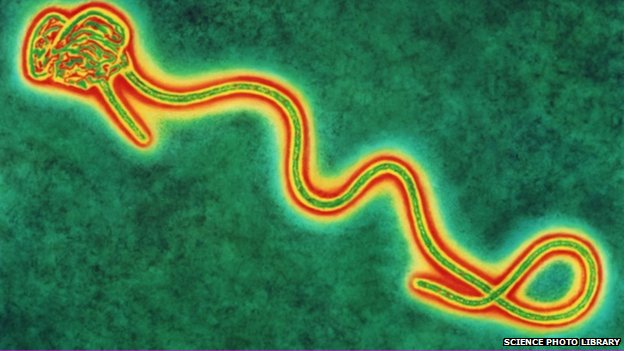 It’s winter here in the midwest; a time of snow and cold, true, but also a time of quiet reflection, long days to ponder what we are thankful for living in the United States of America. Yes, despite the political squabbling in our nation’s capitol that’s reported about on a daily basis, we have much to be thankful for– no large scale wars, an abundance of food,and the freedom to openly have and express our beliefs, even if they’re not part of the mainstream. And though it certainly has it’s troubles, we all have access to healthcare, with much of it being the envy of the rest of the world.

One area of the world that certainly is lacking in optimal healthcare is West Africa. There, since the first reported case last summer, Ebola–a filovirus that is spread from human to human via direct contact with body fluids such as blood, sweat, semen, and urine–continues to ravage the people living in the countries of Guinea, Liberia, and Sierra Leone, with the number of confirmed deaths at over 7,000. Unfortunately, with a poorly-funded–at best–public healthcare system and no definitive vaccine or treatment for Ebola, the death toll will continue to rise.

We in the medical community have become all-to-aware of the signs and symptoms of this deadly virus called Ebola–fever, severe headaches and muscle pain, diarrhea, vomitting, abdominal pain, and unexplained hemorrhaging (bleeding) from all parts of the body. Yet what we don’t know yet is exactly how Ebola causes its terrible damage leading to a painful death for those infected. One of the main theories being put forth that this virus causes it’s terrible toll through damage to the body’s immune system.(1)

The human immune system–a near miraculous part of the human body consisting of a variety of cells that patrol our body the way soldiers protect their countries–keeps constant vigilance for invading microorganisms and destroys them before they can destroy us. Yet some diseases like Ebola seem able to get around these defenses and cause a swift, deadly result.

“That’s interesting, Dr. Rosick, but I don’t intend on traveling to West Africa,” more than a few of you might be saying, “so what’s this got to do with me?” Believe me, as much as I love to travel to all corners of the globe, I don’t intend on traveling to Africa either in the near future. But even if you’re not going to an area of the world suffering a deadly viral epidemic, it’s just common sense to make sure your immune system is operating as well as it can to help ward off viral diseases that are present in the United States such as influenza, and one way you can do this is through the use of a special type of bacteria called probiotics.

Probiotics–nature’s gift to all of us

Probiotics, or good bacteria, are just that: bacteria that are present in certain foods like yogurt and kefir and confer beneficial health effects to people when we eat those foods. There’s a growing interest in how probiotics can boost our immune system and protect us against a variety of both viral illnesses, and this is especially important for those of you who are in your 60s or older– research has shown that as we age, the type of bacteria in our digestive system changes–not always for the better–and that these changes can be responsible for many elderly people not being able to fight off infections(2). Yet with the use of probiotics, you very well may be able to increase your immune’s system ability to fight off infections whether you’re young or old.

A recent article in the Journal Probiotics and Health highlighted a study of a probiotic formulation on the immune system in mice (3). Researchers conclusively showed that mice given a supplement containing active parts of the probiotic Lactobacillus rhamnosus V had a statistically significant increase in blood levels of chemicals known as cytokines, which are known to be part of the immune system when compared to mice that were not given the probiotic formulation. Consuming human studies, a just published review article detailed how probiotics can stimulate the immune system, with the authors stating in no uncertain terms “consumption of probiotic organisms in the form of fermented milk or yogurt has been shown to increase cellular immunity in elderly subjects and children.”(4)

Another article in the Journal of Nutrition examined several studies on probiotics and their ability to help prevent the viral illness, influenza in particular, with the authors concluding …”it appears that probiotics, (at least those investigated thus far in clinical trials)…can decrease the incidence and duration of the common cold and influenza, as well as decrease the severity of the symptoms.”(5)

Keeping your immune system strong through the use of probiotics

I want to be clear that I’m not saying that probiotics can be used to prevent or treat Ebola. I’m not. I’m simply stating what current scientific research shows us: that whether you’re traveling to Africa for a once-in-a-lifetime safari or to the local ski slopes for a fun weekend, it makes sense-that by keeping your immune system strong and healthy through the use of probiotics that you’ll potentially be able to better fight off viral infections and have a safe, healthy trip, wherever you may be.

The post The Ebola Outbreak: A Tragedy Continues appeared first on Del-Immune V.

10 Prebiotic Foods for a Healthy Digestive (and Immune) System!